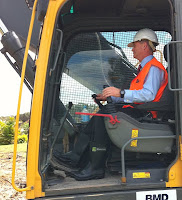 Today a tweet came through my Twitter feed as follows:
sueGCB Sue Lappeman
So its "derm derm' for DERM? RT @KylieJacobson: Campbell_Newman says LNP will deal with the absurdity of DERM.
This was allegedly said at the QLD Rural Press Club Lunch
It confirms my suspicion that should @can_do_campell win #Ashgrove and a majority of seats in the Qld legislative assembly, that he will unceremoniously dismantle DERM...
I am interested to know how the alternative scenarios will pan out, if the mad Katter's tea party get any skin in the game...

The State Opposition have been critical of the Qld Labor Government’s environment credentials indicating that the Department of Environment and Resource Management (DERM)’s poor management was responsible for its ineffectiveness in administering and enforcing legislation.

A LNP Government would repeal the Waste Reduction & Recycling Act & would probably disassemble DERM. Shadow Minister for the Environment Andrew Powell said there’s no proper rigour & reporting in the management of waste in Qld. He cites Auditor-General reports accusing DERM of focusing on outputs then outcomes when it came to mitigating risks to the environment.

Mr Powell was also quoted as saying: "Regional Queensland was subjected to inconsistent monitoring and compliance from the department and there was appalling and limited oversight to assist regions plan effectively."