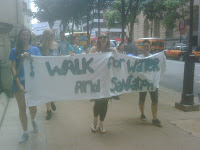 The following release from the Local Government Association signals a return to uncontrolled development.
Clive Palmer is already taking advantage of this with his plans for Mrs Palmer's Resort at Yaroomba.....
It may be time to take to the streets.
~~~~~~~~~~~~~~~~~~~~~~~~~~~~

The Local Government Association of Queensland (LGAQ) says the reversal of a so-called red tape reduction move by the previous Queensland Government is a victory for communities and their ability to influence development decisions.

Under the Newman Government, the Sustainable Planning Amendment Regulation (No.2) 2012 - regarding the exemption of development for existing schools and public hospitals - has been disallowed by resolution of the Legislative Assembly.

LGAQ chief executive Greg Hallam, say the Sustainable Planning Regulation 2009 was amended by the former State Government in February this year, to prescribe that all aspects of development (subject to meeting minor amenity criteria) for existing public hospitals, state, and non-state schools be exempt from local planning instruments.

“This was rushed through without consultation before the Bligh Government went into caretaker mode,” said Mr Hallam. “The change risked opening the floodgates to unregulated development – which could have cost ratepayers millions of dollars to fix.”

“The move by the Newman Government to reverse this decision means that councils and their communities won’t be left picking up the pieces, in regard to the impact of inappropriate development on surrounding residences and businesses.”

The LGAQ sought legal advice on the impacts of the amendment on local government and has lobbied the Newman Government to reverse the decision.

“The LGAQ congratulates the Newman Government for its timely response in disallowing this perilous regulation,” said Mr Hallam.