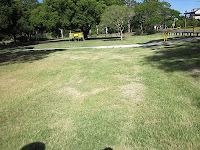 ASBG in its submission notes that when the Queensland Government repeals the $35/t waste levy, it will make it economic sense for NSW businesses to avoid Sydney landfill levies by sending their waste north over the state border. This will occur for back filled loads this year and for one-way trips probably next year. The question is does Qld want NSW’s wastes under it competitive approach between states?

ASBG is calling for collaboration between jurisdictions on waste levies across State borders. It also recommends support for steel and paper recycling.

On 30 March 2012 the Queensland Government announced machinery-of-government changes for departments. The functions of the former Department of Environment and Resource Management will now be delivered by the following departments:

Those of you with responsibilities for vegetation management should note that the new Queensland Government is reviewing current investigation & enforcement processes for alleged illegal vegetation clearing.
The Qld Government is undertaking a thorough review of the way that the penalty provisions of the Vegetation Management Act 1999 (VMA) have been applied to alleged breaches of the Act.

There will be a comprehensive review of the application of the provisions of the VMA to alleged breaches over the next six to eight weeks. The review will initially be undertaken independently of the Department by Crown Law, to determine whether or not a wider external review is required.

Approximately 100 cases of unlawful clearing have been prosecuted in Queensland since the commencement of the VMA in 1999.

A review of Water Licensing

The Acting Director-General of the Department of Natural Resources and Mines: Dan Hunt, has referred to the Crime and Misconduct Commission findings by the Land Court on inconsistencies in the way water licences have been awarded by the department formerly known as the Department of Environment & Resource Management (DERM).

The new Minister for Natural Resources and Mines: Andrew Cripps wants to ensure the new department uses robust, peer-reviewed science and that it follows proper process. Minister Crisp has instructed the new department to commission an investigation into the integrity of the implementation of water resource plans, which oversee water licensing to ensure there is transparency and accountability in the process.


The Case for Water Efficiency

One can be proud of the fact that we (as a society) made some wholesale behavioural changes and achieved a permanent reduction in water consumption (and wastewater generation). The Qld Government is reviewing red tape and promising to reduce the cost of water for consumers.

Within the next 76 days the LNP Government proposes to appoint the Gasfields land and water Commissioner to better oversee the relationship between rural landholders and the CSG industry. At the same time, the Qld Government shall start processes to amalgamate bulk water entities as part of their Four point plan to reduce water prices.

The future of the Queensland Water Commission (QWC) is under a shadow. The regulation and legislation for home and business water efficiency may be revoked by the new Qld Government in an attempt to be seen to be cutting Red Tape. The QWC is an independent, statutory authority established by the previous Qld Government. The QWC is (or was) responsible for achieving safe, secure and sustainable water supplies in South East Queensland and other designated regions.

The draft Position Paper – The Case for Water Efficiency - has been developed by members of the Australian Water Association (AWA) Water Efficiency Specialist Network Committee to advocate for the continued role of water efficient policies and practices in Australia’s future urban water supply and demand management.

The Position Paper makes the argument that water efficiency is a necessary and effective way of maintaining a secure water supply into the future and should be a high priority in a suite of measures to achieve water security.

The case for water efficiency, will be presented and discussed at the AWA’s Ozwater'12 Water Efficiency workshop The Future Role of Water Efficiency in Australia: Developing and Promoting a Common Approach.

The Qld Government is making plans to write down or write off (so-called) non-performing water grid assets. There does not appear to be any appetite in the Qld for commissioning the Western Corridor water purification scheme for the purpose it was designed and constructed.
Posted by rowan at 09:29