my letter from Fiona Simpson


THIS IS WHAT I WROTE TO FIONA SIMPSON

Member for Maroochydore and Speaker of the Legislative Assembly
Queensland Government

Congratulations on your re-election to serve the electorate of Maroochydore.

Congratulations also on your appointment to serve the people of Queensland as Speaker of the Legislative Assembly.

The behaviour of the Queensland Premier this week in Parliament does not demonstrate the "humility, grace and dignity" that he promised in his Victory speech on winning the election in March 2012.

I find it a little hypocritical for the Premier to refer to cleaning up "Anna Bligh's mess" and "Anna Bligh's legacy" with a "pooper scooper" when he left Cr Graham Quirk and the people of the city of Brisbane with a legacy of debt as well.

I wonder what the visiting United Kingdom delegation thought of the Premier's decorum in the Parliament.

The question remains un-answered. Will the Queensland Government will provide funding for counselling services for those 20,000 public sector workers facing the unemployment and an uncertain future?  I would appreciate your thoughts on this matter and how you (as Speaker) might hold the Premier to his promise to conduct himself and the Queensland Government with humility, grace and dignity. 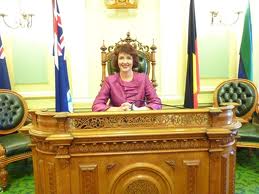 .....AND THIS WHAT SHE WROTE IN REPLY 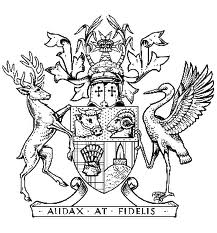 Thank you your congratulations on my re-election as the Member for Maroochydore and
my appointment as Speaker. I consider it a privilege to serve my electorate, and the people
of Queensland.

Regarding questions you pose concerning funding for specific services, I refer you to the
Ministers of the relevant departments, rather than to the Speaker of the Legislative Assembly.

The role of Speaker involves a number of aspects, including presiding over the Chamber.
Member from both sides of politics often engage in robust debate.  My role is to seek to
fairly apply the rules to both sides of the House and allow them the opportunity to
participate in debate.  You are free to express your personal opinion as to how Members
exercise their rights; however I am restrained from doing so due to my need to preside
with fairness.