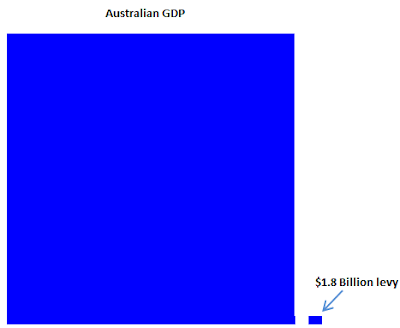 The Federal Government has proposed a $550m cut in funding for Carbon Capture &Storage (CCS) initiatives & the Solar Flagships scheme over the five years to 2014-15, plus cuts to other climate programs redirecting more than $5b to flood relief & reconstruction. The proposed cuts to these programs will deliver $1.7b in savings from 2010-11 to 2014-15. An estimated $1.8b will be raised through its proposed flood levy.

The proposed cuts and deferrals to the CCS Flagships program will deliver savings of $250m over the five years from 2010-11 to 2014-15, with proposed spending in 2010-11 left untouched & $128m of the total scheduled to be saved between 2011-12 and 2012-13.
For Solar Flagships, the cuts and deferrals also total $250m over five years, with this year's spending untouched and $125m saved between 2011-12 and 2012-13.
The changes to Solar Flagships comprise $60 million in actual cuts and $190m in deferrals beyond 2014-15, meaning the total life-of-program allocation now stands at $1.44b.
The Solar Flagships council will continue its assessment of the final round one applications received last month, it remains the Government's intention to announce the round-one outcome mid 2011.
The independent assessment of projects shortlisted under the CCS Flagships program is continuing.
Other cuts & deferrals comprise:
• formally abandoning the cash-for-clunkers election promise (saving $429m);
• saving $55m through cuts and deferred funding for Kevin Rudd’s Global Carbon Capture & Storage Institute;
• abolishing the Green Car Innovation Fund ($234m);
• capping funding for solar hot water and heat pump rebates (saving $160m this financial year and next);
• not proceeding with the 'Green Start' household environmental assessment program saving $129m over this year and next);
• capping annual grants for LPG conversions (saving $96m over 2011-12 to 2013-14); and
• limiting expenditure on remaining solar PV rebates under the Solar Homes and Communities Plan (saving $85m this financial year).

These proposed cuts still have to run the gauntlet of a hung Parliament & the Senate. There is already counter proposals on the table from the Leader of the Opposition.

The Federal opposition are opposed to the flood levy.
Posted by rowan at 11:53