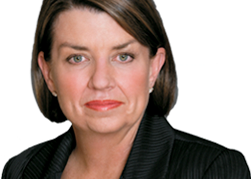 The following Media release from the Qld Premier demonstrates the Qld Government's commitment to coal, cars and cows....
Premier and Minister for Reconstruction The Honourable Anna Bligh 13/12/2011

Ms Bligh said the Queensland Government had committed $1 million to Phase 1 of the project, which is underway at the South Burnett power station following successful trials of the new technology at a purpose-built pilot facility at James Cook University in Townsville.

"Here we have an example of Queensland innovation and scientific expertise being put to work in an Australian-first project," Ms Bligh said.

"It uses algae to soak up the carbon dioxide emissions from the coal-fired power station, and has the potential to enable a wide range of large emitters to reduce the amount of carbon they release into the atmosphere.

Under a process called Algal Synthesis, captured flue gases from the coal-fired power station are injected into waste water contained in long plastic membranes next to the station.

Algae then grow rapidly in the water, with the captured gases providing carbon dioxide and other nutrients, doubling in quantity every one to two days.

"The algae biomass is then used to make bio fuels which can be used to create valuable products such as livestock feed or oils for transport fuels.

"The search for reliable, affordable, commercial alternatives to oil is now a global effort, and Queensland is an increasingly important player.

"Renewable energy, CSG to LNG, and Bio Fuels are all part of securing a cleaner, greener future for Queensland.

"What's more they are securing our vision for Queensland as the Asia-Pacific hub for new energy sources," the Premier said.

Energy and Water utilities Minister Stephen Robertson said when fully operational, it is anticipated that per hectare per annum, the project will capture up to 700 tonnes of carbon dioxide, the equivalent of taking 170 cars off the road for a year.

"The first stage of the one-hectare Tarong Power Station facility is complete, with earthworks finalised, most services connected and vertical growth columns for the algae installed. The project is scheduled to be fully commissioned in 2012."

"As Queensland is one of the biggest coal and gas mining and export regions of the world, the Bligh Government has a keen interest in ensuring that combustion of energy resources produce the lowest levels of atmospheric emissions possible," Mr Robertson said.

"I congratulate Stanwell and MBD Energy for working together on this pioneering project which is about testing and finding real solutions for the global challenge of excess industrial carbon emissions.

"As Water Utilities are part of my Ministerial portfolio responsibilities, I'm also very interested in the fact that this process developed by MBD Energy and its R&D team at James Cook University has the capacity to recycle waste water.

"MBD Energy expects to use the Tarong Power Station display plant as a blueprint for one or more potentially much larger projects that seek to recycle waste flue gases into algae biomass on a commercial scale.

"In order to protect local biodiversity, only strains of micro-algae local to Tarong Power Station have been selected for growing."

Stanwell Chief Executive Officer Helen Gluer said Tarong Power Station was proud to be the first coal-fired power station in Australia to test the technology as part of the MBD Energy trial.

"As an energy company, we are acutely aware of our environmental responsibilities and the need to manage emissions from coal-fired generation while meeting a growing demand for electricity," Ms Gluer said.

"Our partnership with MBD Energy to trial the use of algae to sequester carbon dioxide will yield valuable results to inform an ever-growing body of knowledge in this new and exciting sphere."

MBD Managing Director Andrew Lawson updated the Premier on construction progress during the visit and outlined plans for commissioning the facility and commencing extensive trials beginning next year.

"We will evaluate the system's efficiency in reducing CO2 emissions and its potential to produce valuable products from the algae, such as livestock feed and oils for making transport fuels," Mr Lawson said.

"Our immediate focus is completion of construction, quickly bringing up production to design capacity and then running feed trials for cattle."