The making of "How to be a man" 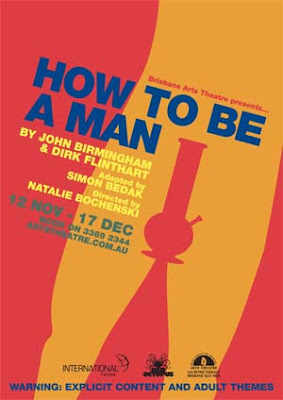 I don't get out much. Perhaps I should. It is hard to escape the share house, that I co-habit with an 11 week old, a two year old and my beloved.
Like most share houses, my house mates spend most of their time drinking, vomiting and looking for their other shoe.
Tonight I went traveling through space and time. I did not have to travel far, to get to the my neighbourhood Arts Theatre......
For today was World Toilet Day and I celebrated by attending a charity, fundraiser performance of a theatre production, otherwise known as "How To Be A Man"...
#HTBAM is the third play in a falafel triology which started with the He Died With a Felafel in His Hand. It is useful to know that the writer Simon Bedak and the director Natalie Bochenski have conspired before on stage productions of Felafel and its first sequel: The Tasmanian Babes Fiasco.... However according to the Natalie, in order to enjoy the play, one does not need to have seen the prequels.
Incidentally, in the course of attending #HTBAM, I happened to meet Greg Wah & Dan Beeston - who are collectively Smart Enough to know Better. The Wah did a top job of raffling off stuff. I think Kat should recruit him to run more raffles for Engineers Without Borders. Apparently DNABeat is credited with shaping the aural landscape of #HTBAM which may explain a lot. The soundtrack to #htbam was freaking awesome. I was particularly impressed with the way Dan jammed #Toto &They Might Be Giants in there.
#HTBAM is the third play in a falafel trilogy, all based loosely on the life and writings of John Birmingham. When I say loosely, I might qualify that I have never personally met JB. I have not read or seen the Felafal prequels as books, plays or the movie. I have never played the board game or collected the Felafal bubble gum cards. So what would I know?
I actually tried to download an electronic copy of the book "How To Be a Man". I finally resorted to borrowing a copy from the Brisbane City Council library. I was surprised to find that it was in the non-fiction section and it was not written on rolls of toilet paper.
I follow John Birmingham on Twitter. I discovered JB and @GirlClumsy via the Fake Campbell Newman. I listened to JB occasionally (and retrospectively) on ABC Local Radio. I have read some of his rants in the Brisbane Times. The things I glean from JB on twitter did not correspond very well with the JB portrayed in the parallel universe, that is the Brisbane Arts Theatre. The JB that I imagine is a family man, a coach of under elevens sports teams and a sharp witted columnist. The occasional exchanges I have had with JB on twitter, have been about Spanish food, parenthood and World Toilet Day.
JB's bio on Amazon reads:

Right now I'm probably kicking back on my hovercraft somewhere in the Antilles, or the Maldives, enjoying a dissolute, essentially meaningless life funded by your generous book purchases. Please, don't make me go back to selling my bodily fluids to science. Buy my books now and I promise to keep indulging myself in grotesque pleasures and luxury that I haven't really earned.

The JB of #HTBAM is on the run from the Australian Tax Office and probably in need of the Australian Toilet Organisation (the other ATO). The JB of #HTBAM smokes a hell of lot of recreational drugs. Now, while I led a relatively sheltered youth, the friends of mine who did play with recreational drugs lost too much of their cognitive functions to host daytime radio or write the occasional novel and an opinion piece in the Brisbane Times, twice a week.
I still have no idea who Dirk Flinthart is. Bergie the Eskimo remains an enigma to me. The cameo appearance by a Bob Katter impersonator was truly spectacular.
If you want to meet the JB of #HTBAM, the play is on until 17 December 2011 including:

If you'd like to meet the real @johnbirmingham, apparently he will be at RiverbendBooks this Wednesday night (23 November 2011)...
Posted by rowan at 23:23

Labels: girlclumsy, How to be a Man, John Birmingham, world toilet day