Will the ALP or the LNP get their shit together? 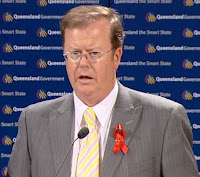 The institutional arrangements for the delivery of water & sewage treatment services are in a state of great flux.
It remains to be seen if either the Labor Party or the LNP (or any of the minor parties) can offer some rational solutions for restructuring the water sector in South East Queensland.
As a first world country, we have more complicated arrangements than most developing communities.....but we still can't get our shit together.
As a society, we flush and forget. The only reminder we get is the water utilities bills (which are now capped at CPI)...
We have fragmented service delivery & we are still dumping (treated) sewage effluent into Moreton Bay, while the infrastructure for water recycling (at Bundamba) is running on idle.
Here is a Statement from Energy and Water Utilities The Honourable Stephen Robertson

Will the LNP support water legislation?

Water Utilities Minister Stephen Robertson said the time had come for LNP Leader Campbell Newman to come clean on whether or not he expects Logan and Redlands ratepayers to share the cost of disestablishing Allconnex. Mr Robertson also called on Mr Newman to reveal how he plans to pay for his as yet un-costed four point water plan. The South-East Queensland Water (Distribution and Retail Restructuring) and Other Legislation Amendment Bill is scheduled to be debated in Parliament today. Mr Robertson said residents in Logan and Redlands deserved to know whether or not the LNP will support the Bill which will hold Gold Coast City Council accountable for these costs. "It was Gold Coast City Council which put its hand up last year to divorce from Allconnex and in doing so agreed to pay the compensation costs of disestablishment to Redland and Logan Councils," Mr Robertson said. "All three Councils support this Bill, the Bligh Government supports this Bill but where does the LNP stand? "For the past 11 months Mr Newman has failed to reveal any detail of his position when questioned by journalists and the Councils. "He's got a slogan 'to give Councils their water businesses back', but he won't say how he would do this and who is going to pay for it. "Time and time again Cagey Campbell has proven incapable of answering the tough policy questions. "No more slogans Mr Newman, Queenslanders deserve answers, particularly Logan and Redlands ratepayers on this issue." The Bligh Government introduced the legislation into Parliament in October last year in order to formalise the three councils' decision to disband Allconnex, and take back their water businesses. The Bill provides a fair and transparent process for ensuring that Logan and Redlands City Councils are not financially penalised as a result of the decision to withdraw from Allconnex.