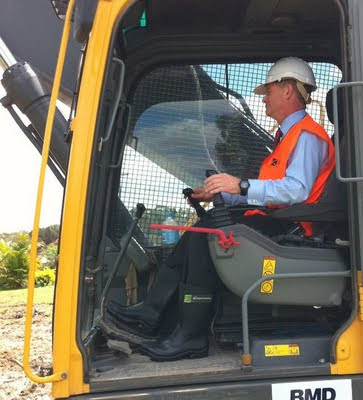 As the end of the Financial Year approaches, many Financial Controllers are attempting to apply theories of Quantum physics to various spreadsheets, with an irrational belief that funds allocated in this Financial Year, will somehow change state, if they are not spent by 30 June.

The Law of Conservation of Matter: During an ordinary chemical change, there is no detectable increase or decrease in the quantity of matter.

The same accountants seem to waste a lot of time and energy without realising that:

The Law of Conservation of Energy states that energy cannot be created or destroyed, but can change its form.

Perhaps some basic physics should be compulsory in Business Schools.

The Hummock Hill Island development proposed by East Wing Corporation, valued at $569 million on the project's website, is in the world heritage area about 30km south of the industrial port of Gladstone in central Queensland.

The proposed development would involve a bridge to the mainland, a golf course, an airstrip, boat ramps, a desalination plant, 790 residential allotments, two hotels, a conference centre and a motel, holiday accommodation, camping grounds, a commercial centre and a retail centre.

As Federal Minister for the Environment, Mr Burke only has the political power to rule on matters which are referred to him by the State Governments with the potential significant impacts on matters of national significance protected under national environmental laws.

Having proposed the decision, Tony Bourke is making his proposed refusal available for further public comment.

Rolling back the EPBC Act?

In the context of the Federal Environment Minister’s proposed refusal of the Hummock Hill Development, the candidate for the State seat of Ashgrove, Campbell Newman expressed his frustrations (and lack of comprehension of) the Federal Government’s powers to stop major projects on environmental grounds.

If elected, a Queensland Liberal National Party (LNP) State Government would seek changes to the Federal EPBC Act way projects like the Traveston Crossing Dam can be scuttled by the federal government, even where they have state approval.

The LNP Candidate for Ashgrove said "Frankly, the use of the environmental protection and biodiversity conservation has got to a point where it's intolerable for a sovereign state to ... deal with anymore,"

The Opposition deputy leader Tim Nicholls said development had traditionally been the responsibility of State Governments.

He said: "There is too much power given to federal ministers in order to be able to stop things that the elected government of a state has made a decision about,"

Mr Nicholls denied concerns by environment groups that changes would herald a return to times when the environment was rarely considered.

Mr Nicholls went on to say: "We have green groups who, if they had their druthers, would have us heading back to the days of living in caves and running around in bear skins," he said.

Queensland Treasurer Andrew Fraser said the Qld State Government disagreed with some Federal decisions and there was a risk of "double jeopardy" in the way the approvals processes were run.

It is going to be an interesting QLD State Election Campaign.

The Queensland Government is committed to developing a CSG industry. In doing so, the State is trying to balance coal seam gas development with strict safety standards to protect the environment and social values of regional communities.

The Qld Government is still quoting the statistic that electricity produced by liquefied natural gas (LNG) results in around 50% less greenhouse gas emissions than coal.

The process of extracting CSG and subsequent conversion to LNG is well established, however there are still lots of unanswered questions being raised about the industry's potential accumulative impacts on the environment and communities.

It is difficult to take confidence in the adaptive environmental management policy and regulatory framework being applied to this industry. On 28 June 2011, the Society of Sustainability and Environmental Engineering are running an event: Coal Seam Gas - Without fear or favour at Engineering House, 447 Upper Edward Street Brisbane.

ASBG will report on the outcomes of this event in the next Sustainable Business Weekly.