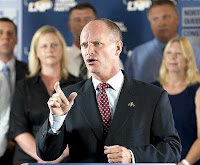 In the course of the Millenium drought (2002-2009), the Labor Government spent $7b on a water grid & water purification & recycling infrastructure.
This infrastructure included the Bundamba Advanced Water Treatment Plant, designed to produce "Purified Recycled" Water from tertiary treated sewage effluent.
Currently, the Bundamba Advanced Water Treatment Plant provides a little bit of water to local industry, Swanbank Power Station and Springfield township. During the Drought it also supplied water to Tarong Power Station. Since 2011, Tarong has water to spare from its own catchment.

Neither the ALP or the LNP have any plans to utilise the idle water recycling infrastructure & stop the Councils or Council owned Utilities from discharging sewage effluent into the Rivers & Moreton Bay.
It is cheaper, more environmentally sound & climate friendly to recycle waste water than it is to desalinate sea water.
In the process of recycling water, one could recover the nutrients (Nitrogen, Phosphorus, Potassium, etc....) that are currently polluting the waterways. These nutrients could be used beneficially in agriculture.
In the light of this, let us have a closer look at the Liberal National Party's Water Policy. The LNP claim that Queenslanders are facing spiraling costs of living and family budgets are under severe strain because Labor can't get the basics right. The LNP Claim that there is no forward planning, Perhaps they have not read the South East Qld Water Strategy ....or perhaps they have, since the LNP Strategy looks very similar.

Granted there were some panic decisions by the Qld State Labor Government caused the South East Queensland Water Grid to be undertaken without adequate planning.

The water grid itself was never a great idea but given the circumstances (Water Supply Dams running empty), it was part of the policy of being seen to be doing something.....

To be fair much of the planning for the Western Corridor water recycling scheme was undertaken by Ipswich Water and adopted by the State Government in a knee jerk response to 7 years of consecutive drought.

This led to the a $7 billion price tag for the Water Grid....At least $600 million was wasted on the failed Traveston Crossing Dam (there is no argument with that).

The $1.1 billion for the Tugun desalination plant was probably money well spent. Desalination is an expensive option but it does provide SEQ with a level of water security that a dam cannot ensure. All other capital cities have gone for similar options.

Another $350 million Wyaralong Dam is not connected to the water grid.

There is no basis for the LNP's claim that South-East Queensland water bills are set to double over the next seven years. Prices have been capped to a maximum rise linked to the Consumer Price Index.

In fact: In the last 18 months, Queensland Urban Utilities reduced prices in four of their five service territories and improved network performance.

The LNP's plan for the future looks much the same as the existing SEQ Water Strategy....

So let's have a look at the LNP is committed to:

This looks a lot like the SEQ Water Strategy:

To date, the LNP has committed to:

None of the above will have significant impacts on the bulk cost of water or retail price of water.
Posted by rowan at 12:10