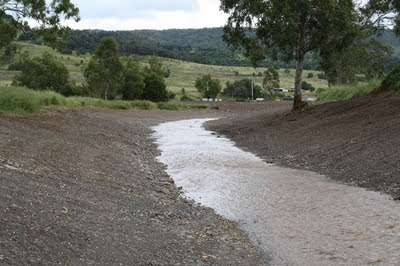 Riparian Zone Clearing A few weeks ago, the Qld State Government received the Interim Report of Flood Commission of Inquiry & committed to implementing every one of the 104 recommendations. There are around 30 recommendations pertaining to the operation of dams as flood mitigation and/or potable water storages.

The Commissions of Inquiry order under which the Commission was established requires the provision of an interim report – by 1 August 2011 on matters associated with flood preparedness, to enable early recommendations to be implemented before next summer’s wet season.


The report endeavours to make recommendations which can be put into effect in time to provide some safeguards should flooding recur this summer. It also deals, particularly where dam operations are concerned, with work which cannot be completed by summer, but the commencement of which was not to be delayed until the Commission’s final report is provided.


To put this in context, the floods of December 2010 and January 2011 strained the resources of a state more used to coping with drought than flood.
The consequences of the floods were shocking. No-one could have believed that people could be swept by a torrent from their homes and killed, as they were in Grantham. Nine motorists could be drowned in the attempt to negotiate floodwaters


The terms of reference were extensive. The Commissioner was asked to inquire into the preparation and planning for the flooding by governments at all levels, emergency services and the community.


In Section 7.3.1 of the commission of inquiry’s interim report, it states that the Locker Valley Regional Council (LVRC) should develop a plan for the removal of debris. When conducted clearing under a debris removal plan, the Council would have needed to gain approval from the Department of Environment and Resource Management (DERM) to remove existing live vegetation in line with Section 7.3.1.


Since the January flood the green light has been given to clear Black Fellows Creek (20 klms already cleared) and parts of Tenthill Creek. Apparently significant parts of Murphy's and Flagstone Creeks are also being cleared.


One of the main sources of the problem is the wording of the recommendation. If one actually reads the text that was used to form that recommendation it says as follows:
"As Dr Jordan, an expert hydrologist consulted by the Commission, observed in evidence, it seems unlikely that vegetation growing in or immediately adjacent to watercourses contributed significantly to the amount of debris washed downstream as compared with the amount of debris comprised of other vegetation stripped from land beyond creek beds and banks and, of course, man-made objects.122"


The wording of the recommendation isn't an accurate reflection of this.
"7.4 Lockyer Valley Regional Council should immediately develop a plan for the removal of debris, man-made and natural, from waterways in the Lockyer Valley and put it into effect so as to minimise the risk should flooding recur in the coming wet season."

It would appear Lockyer Valley Regional Council have over stepped the mark. There are also systemic failures on the part of the Department of Environment and Resource Management (DERM). ASBG will watch with interest at how DERM respond to this situation.


Optimism Last week The QLD Premier addressed the QLD Media Club. One can read the transcript on the QLD Government’s website.
The premise of her speech was her yearning to counter some of the negative messages coming form both sides of politics, with some messages of hope and optimism.
She said that she did not believe either side of politics would stop the “scrutiny” of each other’s policies.


Restriction of Mining Exploration Apparently, no mining exploration will be allowed in and around urban areas of Queensland, including regional centres such as Ipswich, Toowoomba, Beaudesert, Rockhampton, Mackay and St George Queensland Premier Anna Bligh said today, after a new policy was considered by Cabinet.


The Premier said an exploration Restricted Area would be declared over land bound by the South East Queensland Regional Plan as well as other regional centres and towns with a population of 1,000 or more ( as defined by the Australian Bureau of Statistics).

Gas In Qld and Western Australia the State Governments are throwing a lot of weight, money and recourses behind the promotion of their respective gas industries.


Gas is being pitched as a “clean” fuel with less greenhouse gas intensity.

ASBG is all for a transition to sustainable energy with minimal disruption to economic activity, but there are still a lot of questions to be answered about the “life cycle” impacts of gas and the rationale of substituting one fossil fuel for another.