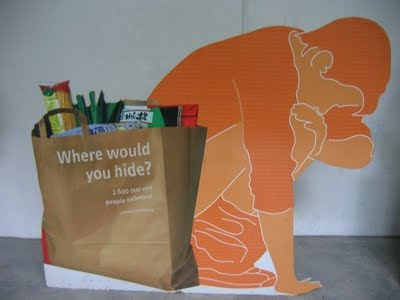 Every purchasing decision we make as individuals and as representatives of the company that we work for is a political, social and environmental decision.

As individuals and as Sustainability Practitioners, we have to look at how we can influence our supply chains both in forwards and reverse. “Life Cycle” analysis should be part of this process.

Sustainability aspects can be introduced into commercial enterprise and form part of the selection criteria for choosing suppliers. In the same way, promoting one’s Sustainability credentials can help differentiate one’s Company from one’s competitors.

In business, there are ways to build in incentives for one’s suppliers (and customers) to get better outcomes for the environment (otherwise known as a return on environment).

For example, one can set Key Performance Indicators for one’s suppliers with a Risk/Reward component. Things like energy efficiency, water efficiency, heat transfer efficiency all have both economic and environmental implications for a business.

These are example of things one might incorporate in Key Performance Indicators used to measure the performance on one’s contractors or suppliers. One might even offer “gain share” incentives to one’s suppliers to encourage innovation.

Sustainability is often defined as “development which meets the needs of current generations without compromising the ability of future generations to meet their own needs".

The Premier went to COAG wanting to ensure Qld will be looked after in any carbon pricing package. Ms Bligh said while a carbon tax would impact on Qld’s “carbon intensive economy”, she remained committed to supporting emissions reductions.

However the Qld Premier still wants to ensure that Queensland gets the best possible deal out of this package.

ASBG notes that Qld (and other State Governments) have had plenty of opportunity to start a transition to cleaner energy generation. Qld actually sold a lot of Stanwell’s renewable energy investments in 2007 and poured a hell of lot of money into carbon capture and storage projects, which have subsequently failed.

Next week we shall have a closer look at the Qld Treasury and Access Economics assessment of the impacts of the Carbon Tax on the Qld Economy.

This week Coal Seam Gas was never far from the news. The Leader of the Federal Opposition, Tony Abbott, came out (as it were) on Allan Jones’ radio program in support of the right of farmers to exclude coal seam gas exploration and/or mining on their properties. The next day he backed away from that position and it is still unclear what he actually believes.

Larissa Water has started stirring the pot as a Qld Senator for the Greens Party by pointing out that the Queensland government has not carried out its own analysis of the greenhouse gas emissions produced by coal seam gas,

An internal government briefing document released after a Right to Information request reveals that in February, energy advisors in the Department of Employment, Economic Development and Innovation admitted there was no comprehensive analysis of coal seam gas emissions available.

It is still unclear whether or not the State Opposition and or the Federal Opposition support open cut coal mining on prime cropping land in the Darling Downs and Central Queensland’s Golden Triangle.

The LNP has asked those with an interest in CSG and sustainable management of our agricultural lands to send in a submission in response to the LNP’s CSG discussion paper.

The Federal Government has proposed streamlining the Environment Protection and Biodiversity Conservation Act 1999.

When proposing a new development, the EPBC Act currently requires an environmental impact statement (EIS) to be prepared if a threatened species or something of national significance is affected.

The proposed streamlining may put the onus back onto the States to both assess and approve developments. .

In a number of recent cases (like Traveston Crossing Dam), the Federal Government has been the last hope for the environment, after State Governments had recommended a proposal go ahead.

Coal in back in Court