will the mud from Legacy Way stick? 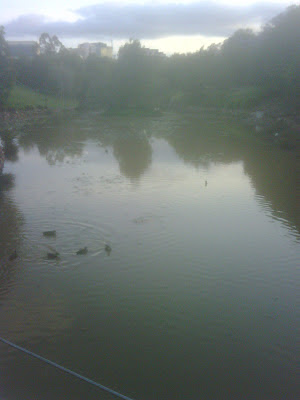 Dear Rayna,
There appears to be an excessive amount of suspended solids in the stormwater from Legacy Way's Eastern construction site. (see attached photo of York's Hollow).
I would be interested to know if this complies with Transcity's Surface Water Environmental Management Plan (sub-plans).
I would also be interested to know, where the designated release point for stormwater is located. Has the construction water quality of stormwater been monitored at the release point (at least weekly), to determine if it complies with the parameters specified in Table 7 of the conditions of the Coordinator-General’s report on EIS?
I note that an attempt has been made to contain stormwater in sedimentation basins along the southern boundary of the site. However, the basins to not appear to have adequate hydraulic capacity to contain the peak flows. This was evident during the acute rainfall event on 13 October 2011 (around16:00 in the afternoon).
I have put a call through to Vanessa at Transcity and I have advised the Department of Environment & Resource Management's Pollution hotline – 1300 130 372.
I am also curious as to whether any of the mud from the $1.8b Legacy Way project will stick to the former Lord Mayor - Campbell Newman, now that he has ambitions to be Premier of Queensland.
kind regards,
Rowan Barber
Posted by rowan at 22:23