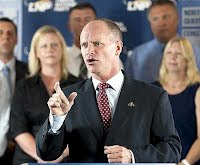 On 13 April the Council of Australian Governments (COAG) released a communiqué announcing its intention to implement changes to environmental laws across Australia. The changes are directed at both Federal and State laws with an emphasis on ‘streamlining’ environmental assessment processes.

The new LNP Queensland Government is also committed to reducing regulation and red tape by 20% and has adopted most of the initiatives that were proposed by the previous Labor Government.

The Newman Government's commitment includes the introduction of the Environmental Protection (Greentape Reduction) and Other Legislation Amendment Bill 2012 into the 54th parliament on 29 May 2012.

As well as contributing toward cutting red tape and regulation by 20%, the Government are claiming that the Greentape Reduction Bill will result in savings of $12.5 million per year, of which $11.7 million will be saved by business and industry.
Alleged benefits of the Bill include:
The introduction of standard applications alone has the potential to save each applicant an average of $20 000 in application preparation costs, 150 pages in application materials and 68 days in processing time. This will cut Queensland's green tape burden by approximately 62 000 pages per year.
Further information about the Greentape Reduction Bill, including updated frequently asked questions, can be found on the Greentape Reduction website.
Following machinery-of-government changes (chopping up of the Department of Environment & Resource Management), the Greentape Reduction project will now be managed and delivered by the Department of Environment and Heritage Protection.

The three key components of the threatened wind back of Federal regulations are anticipated amendments to the Federal Environment Protection and Biodiversity Conservation Act (possibly scheduled during the winter session of Federal Parliament this year), subsequent negotiations of bilateral arrangements between the Commonwealth and State Governments and thirdly changes to State and Territory laws.
This could all occur in the next 12 months.
To put it mildly, environment groups are alarmed at this attack on environmental protection laws. These laws protect our way of life.