the sky is falling 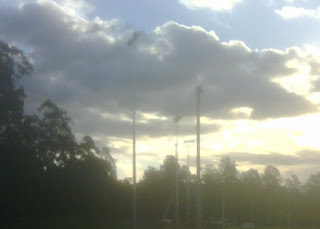 The following press release is Qld Government sponsored scaremongering about the imminent introduction of the Carbon Tax.

Nothing creates greater business uncertainty, than State Government Ministers and the Leader of the Federal opposition, repetitively telling us that the Carbon Tax is going to shut down industries, impoverish families and increase greenhouse gas emissions.

So I went online to see if I could find a calculator to work out how much Carbon Tax I am going to pay:

I have not found a definitive answer.  It turns out, to be swings and round abouts.

Instead I found a calculator telling me how much compensation I might get in a Household assistance package.

The Australian Federal Government released Liable Entities Public Information Database: the official list of the 248 carbon liable companies.  There is no ranking of scale of emissions, but it does provide a who’s who in paying for carbon emissions.

The Federal Government will spend that revenue on household assistance packages and a whole bunch of Programs and Initiatives.

The closer I look, the better off I seem to be. I wonder why this message is not getting through!!???

How does this appease my irrational sense of guilt, at how good my life in Australia is?


Minister for Energy and Water Supply
The Honourable Mark McArdle

One of Australia’s key alumina industry investors, Russian giant Rusal, a 20% partner in Rio Tinto’s multi-billion dollar Boyne Island refinery at Gladstone, has backed criticism of the carbon tax by Queensland Energy and Water Supply Minister Mark McArdle, saying the tax will leave industry “confused and aggrieved”, cost jobs and reverse its intended result by raising global greenhouse emissions instead of lowering them.

Minister McArdle raised Federal Labor hackles last week when he quoted a leading Australian advisor at an international energy forum in Canada who predicted the tax would have “unexpected and undesirable consequences”.

Federal energy advisor John Pierce told the Canadian forum the global market was also spooked by Labor uncertainty about its carbon tax position which gave the policy an “uncertain future”.
Federal Energy Minister Greg Combet responded that the Queensland Minister’s criticism was a “distortion” but has not responded to parallel criticism of the tax from Rusal’s Australian Chairman, John Hannagan who echoed the Minister’s concerns about its fall out.

Mr Hannagan told The Australian today that Australian producers and investors were right in feeling “confused and aggrieved” by the carbon tax which overturned “forty years of government policy” and would actually cause global greenhouse gas emissions to rise.

He said the carbon tax jeopardized our “unrivalled comparative advantage that drove Australia from new entrant to world leader,” but said the tax will actually increase global emissions by undermining Australia’s efforts to curb emissions over the next decade as “new capacity is added in competitor countries and Australia’s share of global production falls.”

Directly contradicting Greg Combet, the Rusal Chairman said Australia already led the world in carbon emission reductions. “Australia has led the world on research into alumina refining over the past four decades and has long been regarded as the world’s most efficient producer. Despite this world-leading performance, the federal government has determined that the industry must sacrifice its position as the world’s most competitive and energy efficient producer to our global competitors.”

Mark McArdle said the Rusal Chairman’s comments showed Federal Labor was delusional. “When you have not just a world authority but now also the Chairman of a key investor in Queensland’s billion dollar alumina industry contradicting you, you know you’re in trouble. Is Greg Combet going to dismiss it all as distortion? Who does he believe, apart from his Prime Minister?
Posted by rowan at 18:42