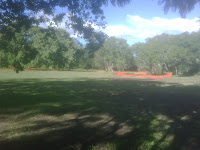 A State of Flux

Environmental Law in Qld (& Australia is in a tremendous State of flux.

This week, the Qld Government had its first Cabinet meeting, since the recent State elections.

The newly elected Premier of Qld: Mr Campbell Newman was also in Canberra this week meeting with in the lead up to a meeting of the Council of Australian Governments (COAG).. One of the topics of discussion was the reduction of Environmental Regulation.

The red (& green) tape reduction reform process was a key topic of the inaugural meeting.

State & territory governments would get a bigger say in environmental approvals to fast-track major projects under a deal to go to the Council of Australian Governments (COAG) this week.

The commonwealth will retain responsibility for World Heritage and "high-risk projects". Currently any company proposing a major development such as a mine, port, rail line or tourist project must meet state & federal environmental rules, which can tie up the project for years.

The former Qld Government’s Green Tape Reduction program has been sent back to square one. The newly elected Government is setting out to “streamline environmental protections”

Mr Newman said the new Queensland position was one of “competitive federalism” but again no one seems to know what the implications are for Environment Protection.

Premier Campbell Newman has rejected suggestions that widening the gap between regulatory systems in different states would actually make it more expensive for businesses to operate across borders.

While the Premier supports a harmonised approach to various forms of regulation, he is advocating that Qld stand up & decide to out-compete other states.

As for cutting "green tape", Mr Newman believed discussions in the pre-COAG business forum did not go far enough.

The Premier wants the Federal Government to delegate the powers of the Environmental Protection and Biodiversity Conservation Act to the states.

He complained that the Federal Government kept "coming over the top" of the Queensland Government to delay major resource and tourism projects.

Mr Newman is seeking legal advice on whether it can fight the carbon tax as unconstitutional.

He expects to get that in the next few weeks. He had spoken to at least one other premier about possibly joining together in a High Court challenge.

Mr Newman said Cabinet also looked at some options to address the issue of high electricity costs for Queenslanders.

As a first action, the LNP government will legislate to ensure carbon tax costs can be displayed on Queenslanders’ electricity bills by 1 July to coincide with the introduction of the Carbon Tax.

Repealing the former Qld Government’s Waste levy was on the agenda of the first Cabinet Meeting of the new Government.

The Waste Levy introduced in December 2011 is being repealed by 1 July 2012 as part of the action plan to deliver the LNP’s Lower Cost of Living for Families Package for Queenslanders.

Premier Campbell Newman said cost of living in Queensland had skyrocketed under Labor and the LNP Government’s focus was to act immediately to start addressing cost of living issues.

His Government will be looking at alternative funding streams to deliver an industry driven waste strategy as part of the budget process.

Following Cabinet consideration, the Queensland Water Commission & Treasury have been asked for an accelerated review of bulk water prices, with options for a new price path to be brought back to Cabinet by 31 May 2012.

Gladstone Harbour seems to be the test case for the new Qld State Government’s approach to Environmental regulation in Qld.