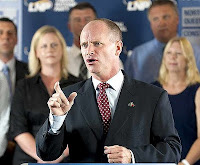 The newly elected QLD State Government has not yet updated it website/s with details of the new cabinet or the departmental changes that are currently taking place.

In order to get a handle on a ever changing context of Environmental Law in QLD, it would be prudent to attend (or send your colleagues to) ASBG’s one day intensive Environmental Workshop on regulation, reporting and management.

The following is a list of the newly announced Qld State Government Cabinet.