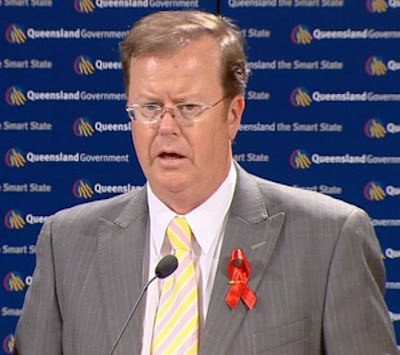 Another press release from The Qld State Government .....
Another attempt to end the blame on water prices......
Energy and Water Utilities The Honourable Stephen Robertson
20/07/2011

The Bligh Government has proposed amendments to the SEQ Water (Distribution and Retail Restructuring) Act 2009 (DR Act) to allow sitting councillors, including Mayors, to sit on the Board of their water distributor-retailer. In an Estimates Committee Hearing today, Minister for Energy and Water Utilities Stephen Robertson said the Governments decision ensured councils would have more immediate access to and involvement with the strategic decision-making process of their water businesses. Councils would also gain a better understanding of specific day to day operational issues and how they impact on customers and the broader communities they represent, Mr Robertson said. This is another step towards making South East Queensland Councils more accountable to their ratepayers. Councils, through their Participation Agreement with their distributor-retailer, are able to review and agree the strategic direction of the water business and m ake an informed assessment of its operations.

The proposed amendments would address once and for all the argument that councils need more control of and direct involvement with their distributor-retailer business.

This will put an end to Councils deception of continuing to label their council-owned water businesses as private entities.

The waters are no longer muddied. Councils will no longer be able to shirk responsibility on the issue.

Mr Robertson said it is important to note that the proposed amendments would not alter the current legislative requirement that the councils appoint the Board members.

However the current associated employee provisions which enable a council employee to be appointed to the Board will be removed, he said.

It should also be clearly understood that the Boards role itself will not alter and it will continue to be responsible for ensuring the distributor-retailer performs its function and exercises their powers in a proper, effective and efficient way.

Mr Robertson said the Government would progress these amendments in early 2012.