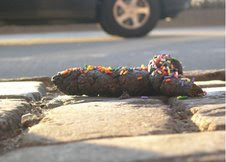 The Bill & Melinda Gate's foundation want to re-invent the toilet.....

The statistics are un-fathomable. Every 8 seconds, a child dies from easily preventable, feacal related illnesses.
In my own community, people have become disassociated from the environmental impacts of our flush toilet. We flush & forget.
In places like Kokopo, in East New Britain, the urban population have been using pit latrines & septic tanks for over 15 years. These systems worked quite effectively for a while. However, eventually the absorption trenches start to fail.
When I say "fail"......I mean to say that untreated sewage.....poo & wee flows to the surface.
In some urban areas in India or Africa or parts of South East Asia, the residents of the city just poo & wee in the streets.
2.6 billion people do not have a sustainable, designated place to poo or wee. In many places, young women stop going to school when they start menstruation, because there is no designated place to change a sanitary pad or tampon (or facsimile).
This is what we call the global sanitation crisis. The word "sanitation" fails to convey the gravity of the situation. People are dying because they live & breathe poo. Children suffer malnutrition, not because of a lack of food but because their food passes through them.
Dysentery. Diarrhea. Vomiting. These are the symptoms of the crisis.
Water supplies become contaminated. Flies, rats & other vermin also contribute to the problem.
Washing ones hands is not always an option.
We need better language to communicate the gravity of this situation. We have to start telling it like it is. We cannot continue to use "sanitised" language.
Posted by rowan at 21:02