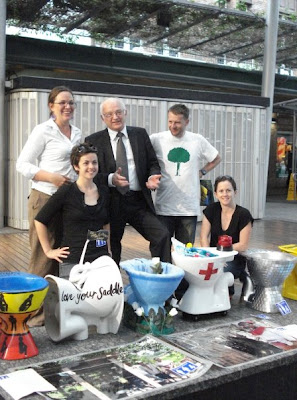 I wonder if you can have a bit of a think & a chat to your colleagues about how we might want to celebrate World Toilet Day in 2011.
The 19th November - is World Toilet Day: http://worldtoilet.org/wto/index.php/programmes/world-toilet-day/78-world-toilet-day-2011
http://www.wateraid.org/australia/about_us/newsroom/8015.asp
In 2008, when I was at the Department of Public Works, we teamed up with Caroma, the International Water Centre & Engineers Without Borders to run a 100 toilet Art Exhibition in the Queen Street Mall. We had Bob Mcmullan (the Parliamentary Secretary for International Development Assistance) come along and open the exhibition. Councillor David Hinchliffe submitted an entry along with local artists & artisans, PR/Marketing & engineering firms.
In 2009, we held a sit in (squat in) at King George Square, highlighting the fact that 2.6 billion people have to squat out in the open or in the streets, because they do not have access to even the most basic toilets.
in 2010, we held "a where would you hide", Art Exhibition, with the Australian Toilet Organisation & WaterAid Australia, using lifesize cardboard puppets. Unfortunately, the puppets drowned in the basement of Brisbane Square in the January flood. We also acknowledged the work of the folks in Urban Cleansing at Brisbane City Council, who clean & maintain public toilets.
Earlier this year, I extorted some money & support from Natalie Bochenski (aka Girl Clumsy) - http://www.girlclumsy.com/2011/02/rowan-doesnt-want-to-help-or-does-he.html
The objective of World Toilet Day is to celebrate our toilets & the benefits that they bring and to raise awareness of the fact that a third of the world's citizens do not have access to a toilet.
~~~~~~~~~~~~~~~~~~~~~~~~~~~~~~~~~~~~~~~~~~~~~~~~~~~~~~~~~~~~~~~~~~~~~~~~~~~~~~~~~~~
Here is a summary of what a toilet means for a young girl (taken from: http://blockbuster.water.org/?p=466)

1) She can stay in school.
Girls in the developing world often drop out of school once they reach puberty because there are not separate sanitation facilities for boys and girls. When menstruating, there is nowhere private to tend to their needs or deal with soiled clothes. The resulting embarrassment and anxiety causes girls to give up on school.

2) She’ll have better health.
Lack of toilets or other sanitation facilities forces girls to wait until nighttime to defecate (under the cover of darkness) or to wake up very early in the morning. This not only causes extreme discomfort, but can also cause urinary tract infections and other gastro-intestinal problems.

Fecal matter is the leading cause of illness in the world. Most of these illnesses, such as diarrhea, are easily preventable with access to sanitation (toilets, or other means of waste disposal). Because no sanitation facilities are available, open defecation is a common practice in rural areas in the developing world – despite the fact that people are ashamed of being forced to use this practice and often know that it is associated with disease. While many adult women suffer chronic diarrhea and survive, hundreds of thousands of girls less than five years old die each year because of it.

3) She won’t have to worry about her safety.
With the setting sun comes the long-awaited opportunity for girls to relieve themselves – but fear is a companion to their relief. When a girl’s only option is relieve herself under the cover of darkness, in a remote field or other removed location, she is more open to attack by wild animals and poisonous insects, and more vulnerable to rape and physical and sexual assault.

4) She’ll have the dignity she deserves.
Imagine living life without sanitation: you have no privacy, no sense of security, poor health, and limited options for staying in school.